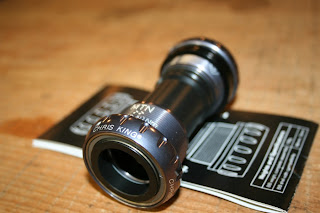 Chris King is starting to get the itch to build frames again after conversation regarding his first incarnation started to build buzz. We welcome the thought of King lugged frames…. 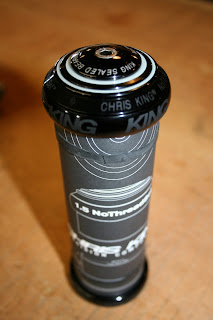 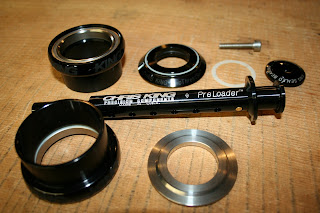 On the subject of Portland…..You know Chris King’s HQ’s are located in Portland as well. And check out this little treat we just recently rec’d. It’s their new 1.5 Devolution Headset to convert frames with a 1.5 head tube so they can use a suspension fork with 1.185″ steerer tube, same bearing deign on a larger scale, a preload shaft to keep things taut up front. I also really like the subtle black on black lettering. Price is $179. 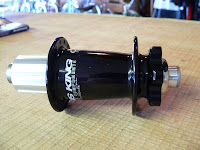 150mm axle on the rear hub that is. Optional stainless freehub shell if need be. Price is King steep….$369. 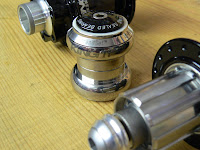 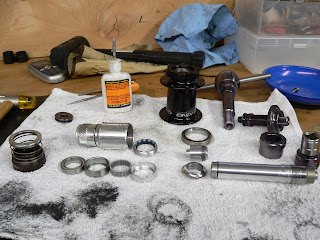 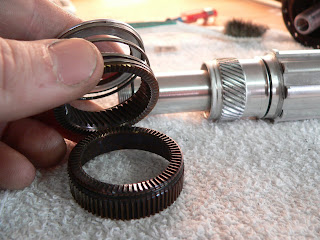 during a recent king rear hub overhaul i thought i’d take a couple of pics of their ring drive system….it’s a beautiful design that’s not as prone to typical pedal torque wear and tear. Why ?? Because much of the loads are displaced from their helical spline, between the spline and the engagement teeth they create a drive that can handle up to 800 ft/lbs of torque…that’s pretty darn good. But besides all of this technical information the true beauty of these hubs is how easily they can be COMPLETELY torn down for an overhaul with the use of the King Hub Service tool. This hub shown here has 4 years of use logged in and the teeth still look brand spankin’ new. The bearings, still buttery smooth. King hubs are expensive but we think they’re worth every bloody cent.
By ChadDevall|2007-01-30T12:32:00-07:00January 30th, 2007|king cycle, shop services|Comments Off on king overhaul
Read More